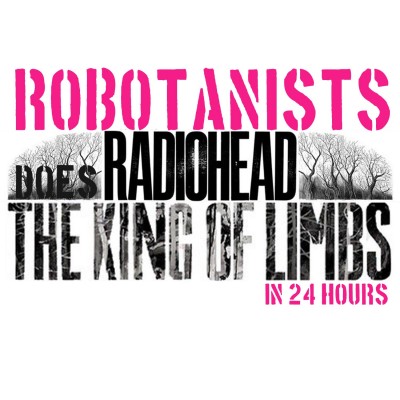 Radiohead announced The King of Limbs four days before they released. In a world of albums getting months if not years of advanced promotion (looking at you, Gaga), you might think this is a pretty short time. You’d of course be right. Know what’s even shorter though? One day. That’s how long it took for California quartet Robotanists to cover the entire thing. Fans have criticized the album for a relatively skimpy eight-song track list. Well, eight songs seems like a lot more when you’ve got 24 hours to learn and record them all. Here’s how they describe it on their website:

It wasn’t an easy project to tackle in such a short amount of time, but we did it (for better or worse). With little sleep and amidst busy schedules, we dissected and reassembled each song as fast as we could then went into our studio and let each one materialize. We started with “Lotus Flower” and worked our way down and back up the record, ending with “Feral.” YIKES!

Giving ourselves a 24 hour time line, we scheduled about 3 hours per song over the course of the weekend… which was nearly impossible once we realized the rhythmic complexity and textural depth of the subtle collection. Songs like “Codex” and “Give up the Ghost” developed themselves easily, in contrast to “Little by Little” which tried every last nerve we had (it was the only one we had to walk away from and come back to several times). We pained ourselves over turning the hauntingly flirty and ambiguously rhythm based track into a synth heavy pop song with clave and shakers, but when you only have a day (and you’ve made up your mind to complete the project), you’d be surprised at what your brain deems acceptable.

Yes. We’re as blown away as you are. These aren’t some halfassed acoustic covers either (though in 24 hours even that would be impressive). These are full-bodied productions, Sarah Ellquist DeBlanke’s vocals echoing in your head long after the 37 minutes end. Stream or download the whole thing below.

Check out more Robotanists at their website or MySpace.