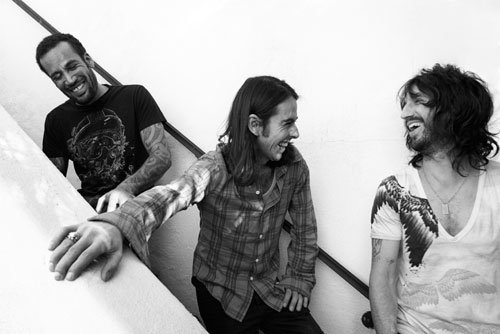 Most bands touring their first album find themselves in the role of supporting act with barely enough time to squeeze in the songs from their debut. Not the case when your band consists of Ben Harper, Dhani Harrison (George’s son) and Joseph Arthur. Trio Fistful of Mercy released As I Call You Down last October, following it up with brief  – okay, very brief – North American and European headlining tours.

At just under 40 minutes, the record can hardly fill a headlining set, so what’s a poor band to do? Play every song off said album? Check. Play tunes from everyone’s accumulated back catalogs? Check. With space still left over, they threw in a few covers. No surprise that they chose a Bob Dylan tune (“Buckets of Rain”); and they harmonize nicely on The Velvet Underground’s “Pale Blue Eyes.” The highlight, however, is their inspired take on PJ Harvey’s dirge-blues “To Bring You My Love,” originally on her 1995 album of the same name. Check out all three below (via TwentyFourBit).

Fistful of Mercy – To Bring You My Love (PJ Harvey cover)

You can find more Fistful of Mercy on their website.