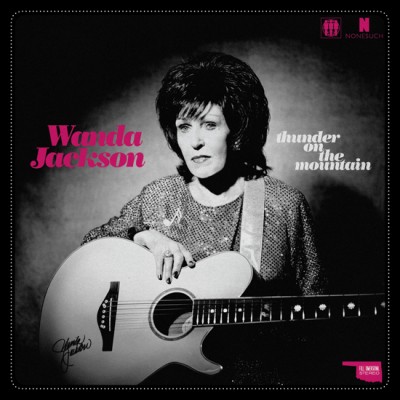 Third Man Records, Jack White’s record label, has picked up some unexpected talent in its short existence. There was that choir of public transit employees. There was Carl Sagan. Now there’s Wanda Jackson. The “Queen of Rockabilly” first began recording in the ‘50s, but, as her upcoming album proclaims, The Party Ain’t Over. Jack White produced the album, and now we have our first taste. Surprise: It features crazy guitar from you-know-who!

White personally asked Bob Dylan for a song suggestion for Jackson. Dylan chose his 2006 concert staple “Thunder on the Mountain.” Good choice, Bob. Under White’s guiding hand, the song blends hard guitars with blasting horns, giving Jackson’s classic sound a kick in the ass. The woman keeps some tradition though; she scrubs the curse words clean and changes “Alicia Keys” to “Jerry Lee.”

White played on the album – along with Jack Lawrence (The Dead Weather/The Raconteurs), Carl Broemel (My Morning Jacket), Patrick Keeler (The Raconteurs), Ashley Monroe, Jackson Smith and Karen Elson – and these guitar solos are almost certainly his. They sound just like the ones he laid down on that Secret Sisters track. Listen below.