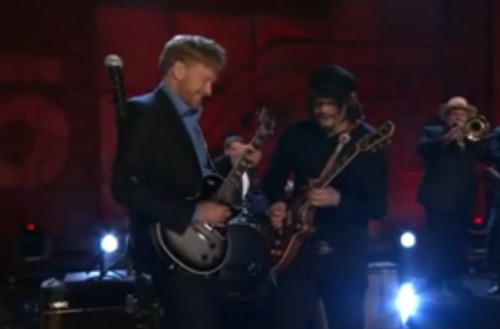 Jack White returned to [Insert Show Title Here] with Conan O’Brien last night for the umpteenth time. He didn’t bring the White Stripes, Raconteurs, or Dead Weather along this time though. Instead, he brought his ace in the hole: Conan O’Brien. Backed by Jimmy Vivino and the Basic Cable Band, White and O’Brien rocked Conan’s first night out with a reprise of “20 Flight Rock.”

The pair first performed the song at White’s Third Man Records over the summer, jamming out the Eddie Cochran tune with horns and plenty of soloing. Last night the reprise featured snappier dressing, but the same dirty guitar work. Seeing Jack front a swinging big band was…different. If his raw blues doesn’t entirely work with their über-polished swing, well, it was a fun night regardless. Watch it, along with the subsequent O’Brien-White interview, below.