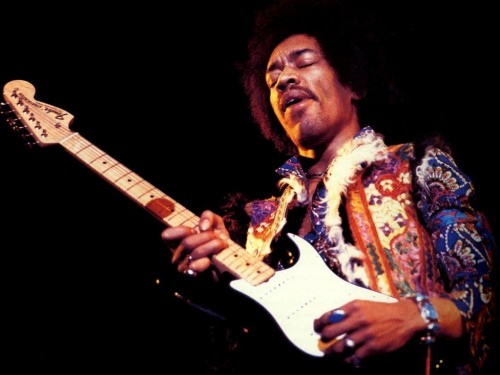 I think it’s safe to say that Jimi Hendrix was a pretty big fan of 1967 Bob Dylan. From Dylan’s ’67 John Wesley Harding, he’s covered “All Along the Watchtower” (obviously) and “Drifter’s Escape.” Now, for the first time, we hear him dip into Dylan and the Band‘s 1967 “Basement Tapes,” with his vintage take on “Tears of Rage.” The guitar style blends Delta blues picking and electric slide raging, finding a rhythmic-but-rocking center. Though the playing sounds mostly solo, Paul Caruso adds a little harmonica and takes Rick Danko’s backup lines on the chorus.

“Tears of Rage” comes off an upcoming box set West Coast Seattle Boy, which features four discs of never-released recordings. With the new album Valleys of Neptune already out, 2010 is shaping up to be the best year for Hendrix fans in a long while. Listen to “Tears of Rage” over at RollingStone.com.