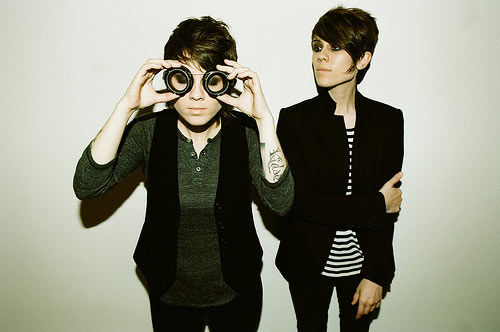 • Tegan and Sara covering any holiday song would likely be adorable, but hearing them do “The Chipmunk Song (Christmas Don’t Be Late)” is the auditory equivalent of a thousand kittens.

• We’ve already seen John Legend and the Roots cover Arcade Fire’s “Wake Up” live, so the sounds we bring today shouldn’t come as any shock. Still, finally hearing the studio version of the song that inspired the Wake Up! album – on sale at Amazon for $1.99 – is a treat. Questlove’s drumming swings, particularly when they hit the country-funk breakdown.

• In 1978 Queen staged a nude bicycle race to promote their double-A side single “Bicycle Race” and “Fat-Bottomed Girls.” Honoring that legacy, Jimmy Winchell and Flecton Blue Sky teamed up to cover both songs. Winchell describes “Bicycle Race” as “…a genius mix of spinal-tapish clever/stupid exultation of big beautiful women on bicycles, but also a call to arms to get one’s head out of the arse of pop-culture and enjoy the simple pleasures of being alive.” Download both below.
MP3: Jimmy Winchell – Bicycle Race (Queen cover)
MP3: Flecton Blue Sky – Fat Bottomed Girls (Queen cover)

• One could make an argument for On the Beach being Neil Young’s most underrated album. Of course, one could also make that argument for Trans – considering it anything other than “abysmal” would count as underrated. Regardless, we rate Emily Reo’s “On the Beach” exactly as it should be: spooky-gorgeous. While you’re at it, grab her older Built to Spill cover too.
MP3: Emily Reo – On the Beach (Neil Young cover)
MP3: Emily Reo – Car (Built to Spill cover)