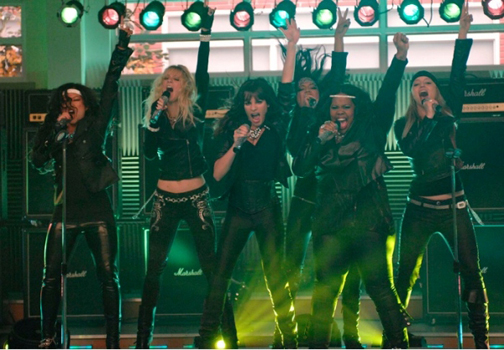 Before Glee begins its parade of guest stars and themed episodes that will lead us into the half-season break, it takes a breather to give us a pretty standard episode in “Never Been Kissed.” In a year full of novelty shows, an episode where nothing too out-of-the-ordinary happens almost feels like a stunt itself. Alas, no crazy casting pops up to distract from the major drama that populates this week’s installment. Instead, we focus on another round of boys vs. girls mash-ups (a callback to last year’s “Vitamin D” competition) as the Glee gang deals with a lot of sexual tension or, more accurately, tension that results from one character’s sexual orientation.

Though I’ll leave the plot intricacies of “Never Been Kissed” to other websites, I will say that generally I’ve enjoyed Glee‘s mash-ups. Last season gave us a couple great ones: “Don’t Stand So Close to Me/Young Girl” (The Police/Gary Puckett), “Borderline/Open Your Heart” (both Madonna), and possibly my favorite piece of music from the show, “It’s My Life/Confessions” (Bon Jovi/Usher). Mash-ups give the Glee band a rare chance to create a new piece of music, usually to great effect. Interestingly enough, “Never Been Kissed” features a second Bon Jovi mash-up. I knew that going into the episode, and it gave me high hopes for this week’s music. Let’s dive in!

1. One Love/People Get Ready (Bob Marley/Curtis Mayfield)
Puck (Mark Salling) and Artie (Kevin McHale) jam out this 1977 tune in their school’s courtyard to make a little cash. In doing so, Glee pays a little homage to its mash-up roots. Marley and his band the Wailers had previously recorded “One Love” in 1965 but later released a version which included bits and pieces of the Curtis Mayfield song “People Get Ready.” Thus, instead of presenting their own mash-up, for the first song of the night Glee just covers an existing one. Glee cast version / original version

2. Teenage Dream (Katy Perry)
Cover Me’s seen a lot of “Teenage Dream” this year. At least Glee does something interesting with the arrangement by turning it into an a cappella number, courtesy of our heroes’ rival choir over at the all-boy Dalton Academy. I really liked this version of the song; Glee definitely earns points for experimenting with the arrangement of a mega-popular song.  Original version

3. Start Me Up/Living on a Prayer (The Rolling Stones/Bon Jovi)
Ugh. The girls’ song shows us that Glee‘s lost its talent for Bon Jovi mash-ups. See for yourself: these two songs just don’t go together. A Glee cast version of “Living on a Prayer” could have been tremendous; instead, the show ruins it by tacking on random phrases from a Stones song. Also, Glee’s squandering a number of Jovi songs on these collaborations… how about giving the Jersey boys a number all to themselves?   Glee cast version / “Start Me Up” / “Living on a Prayer”

4. Stop! In the Name of Love/Free Your Mind (The Supremes/En Vogue)
Glee makes up for that last song with this inspired mash-up from the boys, though. They combine the classic 1965 Motown single with En Vogue’s alternative/R&B hit and manage to incorporate the best elements of each song’s sound into a tight package. They also put a nice cap on the episode’s themes and pull off some pretty wicked choreography. This has been one of my favorite performances from the season so far, and a great example of what Glee can do when it flexes its musical creativity.  “Stop! In the Name of Love”/ “Free Your Mind”