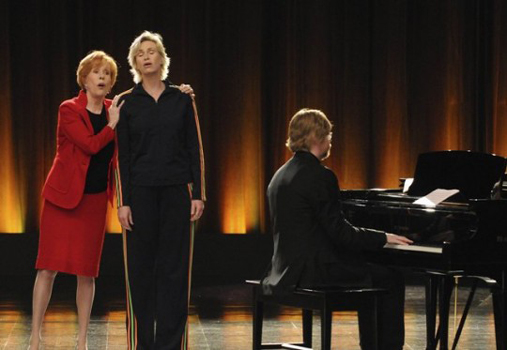 Superficially, this week’s episode of Glee has a lot in common with last week’s. Once again it’s got a celebrity guest star, a fairly outlandish plot (two weddings in one episode!) and only four musical numbers. Yet tonally the two shows feel vastly different. Last week’s “Substitute” showcased Gwyneth Paltrow as some kind of madwoman with an unbelievable fear of commitment; it only touched on any kind of grounded emotion towards the end when viewers got a glimpse of a real person hidden underneath Paltrow’s persona. Mostly, though, the episode revolved around giving her excuses to sing popular songs.

This week’s entry into the Glee canon takes a wholly different approach. Although it boldly brandishes that wonderful lack of reality viewers love or at least tolerate about the show (the same couple gets engaged and hosts an elaborate wedding in the same episode), this episode intensifies its emotional content significantly in comparison to last week’s offering. For instance, although the notion of throwing a wedding so quickly is essentially farcical, Glee injects some real emotions into the union of Kurt’s dad and Finn’s mom. More seriously, the bullying plotline that’s been bubbling for the last three episodes comes to a head, and Kurt’s situation finally gets the serious treatment it deserves. Indeed, the episode ends not with a gigantic celebratory choir number like “Singin’ in the Rain/Umbrella” but a fairly sad revelation about Kurt’s future. Seldom do Glee episodes not build to a musical climax, let alone end on such a downer.

The point being: this week’s Glee seems to use music not as its centerpiece but more incidentally. That’s a strange move for a show focused on music, and it somewhat mollifies most criticism about tonight’s musical selections. Yes, for another week Glee doesn’t really stretch itself in picking the music for tonight’s episode. They feature a track from a 1953 musical, a mambo from the same year updated by Michael Bublé and two songs from Bruno Mars. But the content of the episode itself obscures the fact that this week Glee‘s music doesn’t really impress (and how often does the opposite happen?).

Still, time marches on and the kids of Glee sing and dance their hearts out, so let’s talk about it!

1. Ohio (from Wonderful Town)
This song comes from a 1953 Leonard Bernstein musical about two ladies who leave Ohio to find a better life in New York City. Here it’s sung by screen legend Carol Burnett in the role of Sue Sylvester’s (Jane Lynch) estranged mother Doris along with Sue herself. Lynch rarely gets a chance to strut her stuff vocally; she sang only three songs last season (notably “Vogue” and “Physical”) and this is her first credit this year. One wonders how much of Jane’s voice actually comes through Glee‘s production; although Lynch has many talents, singing may not be among them. Still, hearing Carol Burnett tackle a song will surely prove a treat for many viewers, and Glee performs this number in a wholly enjoyable way.

2. Marry You (Bruno Mars)
The first of two Bruno Mars songs in “Furt,” “Marry You” is sung by the choir at the wedding ceremony joining Kurt’s dad and Finn’s mom. It’s strange for Glee to incorporate two songs by one artist in a regular episode, especially since one’s not really a hit single. Sure, “Marry You” fits the scene well topically, but didn’t The Office do basically the same gag last year? Granted, The Office cast doesn’t sing…but maybe they should.  Watch the Glee version.

3. Sway (Michael Bublé)
Modern pop crooner Michael Bublé is essentially a covers artist himself; “Sway” comes from a 1953 mambo called “Quien Sera?” by Mexican bandleader Pablo Beltran Ruiz. Dean Martin famously recorded the song in 1954 (and the Pussycat Dolls less famously recorded it in 2005). In Glee, Will Schuester (Matthew Morrison) performs it at the Hummel/Hudson wedding reception; apparently he’s been hired as the wedding band, a feat which would probably bankrupt most couples in real life. Watch the Glee version.

4. Just the Way You Are (Bruno Mars)
The kids of Glee can’t just claim the wedding ceremony for themselves; they have to take the reception, too. The choir rocks this song as part of Finn’s incredibly elaborate best man speech. It’s kind of the same scene as “Marry You,” but a little more emotionally resonant. Notice how everyone dances and especially who they pair up with–it’s a genuinely nice, celebratory moment in this episode of Glee and it provides a stark contrast to the fairly grave ending of the episode.