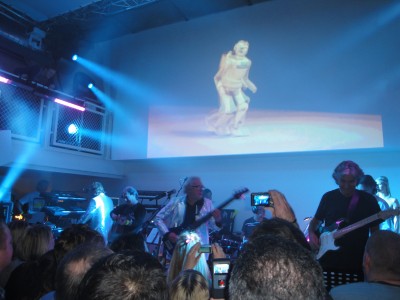 When you think “culturally relevant,” one name leaps to mind: the Buggles. Okay, maybe not. But relevant or not, their trademark sense of humor hasn’t aged. At Tuesday night’s London reunion gig, the band played their debut album The Age of Plastic in full. This includes their mega-hit/first-video-on-MTV “Video Killed the Radio Star.” They played it; people went nuts (I assume); they finished the album. Nothing surprising there.

For the encore, they began playing “Video” again. Cue eye-roll. But wait…this isn’t “Video Killed the Radio Star.” No, it’s “Check It Out,” the brand-new single by the Black Eyed Peas‘ will.i.am and Nicki Minaj, which heavily samples “Video.” It’s about as well performed as you’d expect (not very). It’s also as fun as you’d expect (extremely). “This beat is banging,” indeed. Check it out (heh) below. (via Slicing Up Eyeballs)

The Buggles don’t seem to have a website, so just go watch the original “Video” video.