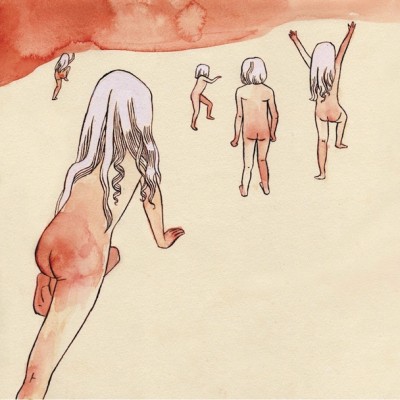 I, like so many others, love Led Zeppelin. I have all of their albums, box sets, and various paraphernalia. Led Zeppelin soundtracked my teenage years, helped me realize how bad most ’80s hair bands were (thanks guys) and led me to discover other great musicians Led Zeppelin cited as influences. Because their musicianship and writing is so strong, any cover will instantly be compared to the iconic original. Therein lies the rub for an artist attempting a Led Zeppelin cover. Completely re-imagine a song and risk being torn apart by the purists; stay too faithful and be told that your cover pales in comparison to the original.  Some artists on The Land of Ice & Snow are faithful to the original, others…not so much. One of the few times being unfaithful is a good thing.

Several of the bands chose to add various interludes when trying to make the song they chose their own. Kind of Like Spitting adds a feedback-laden midsection to “Good Times, Bad Times”, and Knock Knock includes banjo, harmonica, DJ scratching and Hermann Melville recitations on “Moby Dick”. In fact, during the song, someone comments that they’ve run out of ironic instruments to add to the song. The ‘singer’ from Pellet Gun speaks the lyrics on “Rock and Roll,” but the music behind him is so fantastic that the song rocks (and rolls) regardless. A few songs even surpass the originals (blasphemy!). “Poor Tom” by Adam Selzer adds thunderous drumming and dissonant guitar licks. Kelly Blair Bauman appears to have strategically omitted lyrics from “Stairway to Heaven” to keep the listener focused on his version of the song.

One thing that becomes abundantly clear while listening to these songs is how well the melody and structure of Led Zeppelin’s songs lend themselves to female vocalists. Even without modifying the song structure much, female artists are able to make the songs their own. “Tangerine” by Jeff London (female harmonies), “Friends” by Amy Anelle & the Shishi Valley Boys, and “Bron-Y-Aur Stomp” by Arch Cape are standouts when the ladies handle the vocals. The songs’ meaning and intent changes when a woman sings Robert Plant’s lyrics (especially when misogyny rears its ugly head). Also unexpected is how well strings, especially cellos, enhance the songs that include them. When Jimmy Page played his guitar with a bow, it wasn’t just for show. The cello solos make “Dazed and Confused” by The Portland Cello Project featuring Laura Gibson & John Moen a must-listen.

When creating a tribute album, contributors try to pay homage to the artists who inspired them without embarrassing themselves. Listening to the songs on From the Land of the Ice and Snow: The Songs of Led Zeppelin, these artists do exactly that. The overall quality of the tribute is especially surprising considering the sheer number of songs included here. It should whet the appetite of any cover lover that there are an additional 16 songs waiting to be downloaded. On the discs and bonus tracks alike, impressive musicianship and bold reinterpretation abounds. This collection should be considered a candidate for covers album(s) of the year.

From the Land of the Ice and Snow: The Songs of Led Zeppelin Tracklisting:

One Response to “Review: From the Land of Ice and Snow (The Songs of Led Zeppelin)”