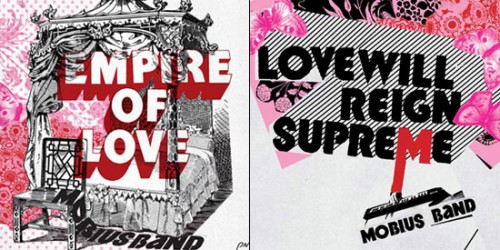 So instead, we use the occasion to revisit their two prior EPs. The band irreverently squeezes artists old and new into their indie pop mold, treating love songs by Townes Van Zandt and Kanye West with equal care. The 2008 EP Love Will Reign Supreme transitions straight from Bob Dylan (“I’ll Keep It with Mine”) to Daft Punk (“Digital Love”). Empire of Love, released one year later, gives the Dixie Chicks’ “Lullaby” a haze-pop sheen and adds xylophone to TV on the Radio’s “Satellite.”

To give you an idea, we’ve got their covers of Kanye, the Chicks, Dylan, and Daft Punk below. The full sets are still up on their website. Click the titles to download them in their entirety: Empire of Love and Love Will Reign Supreme.

Love Will Reign Supreme Tracklist:
1. Razor Love (Neil Young)
2. Baby We’ll Be Fine (The National)
3. True Love Will Find You In The End (Daniel Johnston)
4. In A Green Cotton Sweater (Casiotone For The Painfully Alone)
5. I’ll Keep It With Mine (Bob Dylan)
6. Digital Love (Daft Punk)

Check out more Mobius Band (R.I.P.) on their website or MySpace.