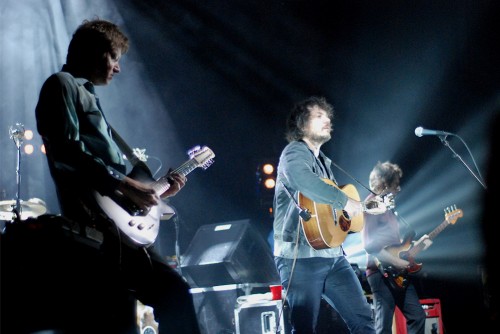 To conclude that Wilco’s longevity is due to some sort of a constant and timeless sound would be dead wrong, however, as our latest Live Collection shows. The covers below, which include romps through the works of David Bowie, Sheryl Crow, the Ramones, and even a few half-hearted attempts at tracks by one of Farrar’s subsequent projects, Son Volt, show just how much Wilco has changed through the years. The Wilco who covers “Organ Blues” in 2000 sounds little like the one who does Tom Petty’s “Listen to Her Heart” in 1995. Sure, their 2002 cover of The Stooges’ “TV Eye” anticipates the pulsating pianos and dissonant guitars that would not truly define their albums until years later, but as a general rule, you can follow the arc of the band’s sound through the years pretty closely via the covers below.

If nothing else, don’t miss their cover of “Love Will Keep Us Together.” It’s part of a cover-heavy New Year’s set from 2004 at Madison Square Garden, alongside four others included below. I haven’t yet decided how embarrassed I should be to admit how much I like it.

Check out more Wilco at their website or MySpace.