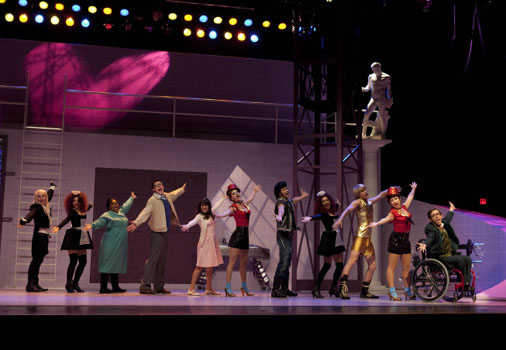 Glee‘s been busy this season. When they’re not angering parents with talk of scissoring or risqué photos, they’re shining the spotlight on individual artists and productions in themed episodes. The entirety of last season only had two, one of which featured Madonna and another all about Lady Gaga. Yet only five episodes deep in the second season we’ve already had as many served to us, and we know there’s more to come. This season’s second episode, “Britney/Brittany” (featuring the music of Britney Spears) received the highest ratings of the season and second-highest for the show’s entire run. Although we won’t know right away, I suspect last night’s episode, which brought us the music of The Rocky Horror Picture Show, will do just as well.

Themed episodes are a savvy way for Glee to expand its already-massive audience, because each of those episodes delivers huge crossover potential. People who may not watch Glee regularly might still be big enough Britney Spears fans, for instance, to care what the show does with her. And if going to a liberal Midwestern college with a theater a block from campus has taught me nothing else, it’s that Rocky Horror has its fair share of fans.

“The Rocky Horror Glee Show” had a lot of potential, I thought, especially as it relates to the topic of this blog. Wouldn’t it be interesting, I mused, to see a cover episode of television? Having a show recreate a movie or play with its own characters has been done a few times before for comedic effect (see: episodes of The Simpsons or Community), but to do it straight has not, to my mind, been attempted. But that’s the world that might have been; this episode instead focused more on the production of McKinley High Glee Club’s performance of Rocky Horror than the performance itself.

However, that’s not to say that “Rocky Horror Glee Show” wasn’t interesting. Musically the episode didn’t take too many chances; as one might expect in a real-world performance of Rocky Horror, the song arrangements were basically unchanged (though I was happy and surprised that Glee kept Rocky‘s one bit of non-diegetic music, “Science Fiction/Double Feature”). The fun of this episode was seeing which kids (or adults!) were cast in which roles and watching them run wild with it. That said, here’s a rundown of the music from “The Rocky Horror Glee Show”.

1. Science Fiction/Double Feature
This Ziggy Stardust-era David Bowie sound-alike opens both the Rocky Horror movie and its Glee counterpart. Both feature the memorable visual of bright red lips against a stark black background. Glee‘s Naya Rivera gives us this episode’s version (no word on whether those are her lips), but, although she’s a great singer, her vocal tone doesn’t really convey the spacey weirdness of the original to me. Glee cast version / Original version

3. Hot Patootie
Meatloaf’s performance in Rocky Horror is my favorite part of the movie, so I was skeptical as to how Glee would pull off his signature song. Turns out the answer is simple: let John Stamos sing it! I could not stop smiling while Uncle Jesse belted this tune. I was waiting for the show to give his character a lead vocal since they introduced him in the aforementioned “Britney/Brittany,” and I think the show’s producers did us all a favor by turning him loose on this high-energy number. For the casting choice alone, I’m calling “Hot Patootie” song of the night.  Original version

4. There’s a Light (Over at the Frankenstein Place)
Glee doesn’t give us much of this particular scene, although it’s nice to see Rachel break her two-episode streak by aping someone other than Barbra Streisand, taking the Susan Sarandon role here.  Glee cast version / Original version

5. Sweet Transvestite
Another inspired bit of in-show casting: Mercedes (Amber Riley) takes on Tim Curry’s unforgettable role as Dr. Frank-N-Furter. No one can replicate Tim Curry, of course, but Amber Riley delivers a great vocal performance and I would’ve loved to see more of her in this role.  Original version

6. Time Warp
Rocky Horror‘s signature song becomes that once-an-episode occurrence for the whole Glee Club to come together in a show-stopper. Kurt (Chris Colfer) does a great job as Riff-Raff, though in the end I don’t feel like this performance does anything too special, especially not when stacked against some of this episode’s truly inspired moments.  Glee cast version / Original version

7. Touch-a, Touch-a, Touch-a, Touch Me
This song (which always reminded me of Blondie) affords school counselor Emma (Jayma Mays) a rare chance to take a lead vocal. For that alone, it’s worthwhile. When Glee adds to it their lovely cheerleaders Santana (Naya River) and Brittany (Heather Morris) in the roles of the Columbia/Magenta chorus of onlookers, I’m sold.  Original version