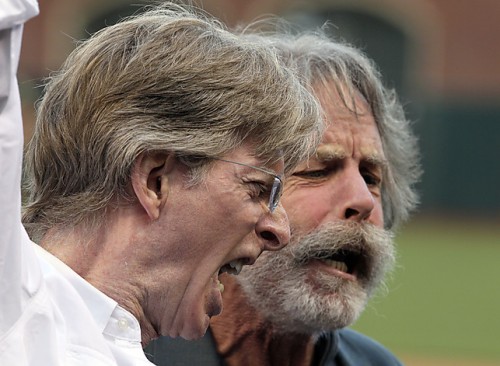 Music fans, on the other hand, are having a field day (get it? field day? heh). At last Wednesday’s NLCS game between the Giants and Phillies in San Francisco, Death Cab frontman Ben Gibbard sang the national anthem. As if that wasn’t enough, Gibbard’s wife, She and Him‘s Zooey Deschanel, took on “God Bless America” during the seventh inning stretch. Gibbard and Deschanel – the match made in indie heaven – were a nice lead-in to Phil Lesh and Bob Weir of the Grateful Dead, who sang “The Star-Spangled Banner” at the game the following day. All three of these performances, available for streaming below, are remarkable in their simple beauty.

Meanwhile, at the home opener for the Boston Bruins of the NHL on October 21, Stephen Tyler of Aerosmith howled the national anthem as only he can. Note how he slurs “And the rocket’s red glare” at 1:20. Yuck. Check it out below.