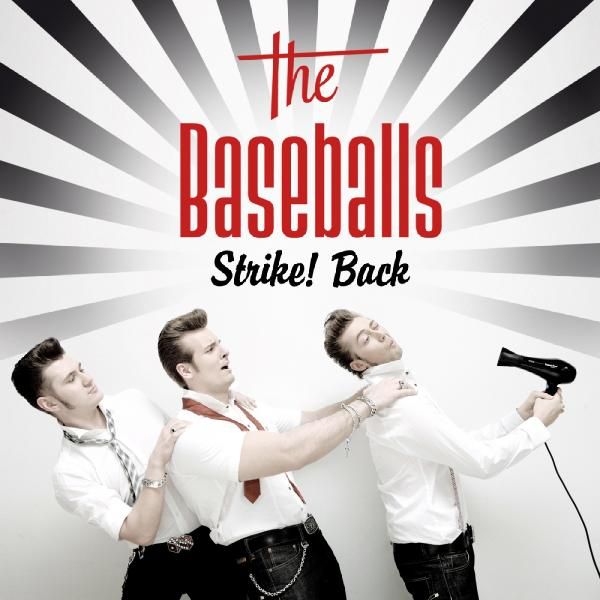 On The Baseballs Strike! Back, the expanded re-release of their 2009 debut Strike!, the nostalgic trio rips off Domino, Jerry Lee, and all their Brylcreem-slick peers. Their sound isn’t particularly innovate, but that’s the whole idea. These guys adapt that early rock and roll style to current pop hits. Ever wonder what Beyoncé’s “Crazy in Love” would sound like as skiffle? Probably not, but they’ll show you anyway.

The shtick factor is high, but the trio performs this style of music well. Too well. Each song turns some shlocky Top 10 hit into a three-minute rave-up to make you jump, jive, and wail. Specifically, it turns each top 10 hit into the same three-minute rave-up. When you try to adapt a singles-driven era to a full-album decade, such is the price of authenticity. You may start out bopping to recast takes on Usher and Rihanna, but by the time the band hits Lady Gaga sixty minutes later, you’re just about ready to burn your copy of Grease.

That said, when you look at individual songs (as you would if this actually were 1955), there’s a lot to like. Their best-known cover, “Umbrella” becomes a Coasters-esq bop tune that’ll get you humming now matter how sick you are of the song. Leona Lewis’ “Bleeding Love” turns Four Seasons, with plenty of “doo-wop, doo-wa-da” backing. Generally, the songs that originally contained elements of soul translate best. So Melanie Fiona’s “Monday Morning” sounds like a soundtrack to the drive-in, while Katy Perry’s “Hot N Cold” screams forced novelty.

You may have already picked up on a fatal flaw here. Pop covers have a limited shelf life and these songs are well past their expiration date. Who wants a cover of “Pokerface” after “Bad Romance,” “Telephone,” and “Alejandro”? The original Strike! came out in 2009, so the songs there can be forgiven for being about as hot as the Pussycat Dolls’ career, but the five songs on the new disc – what’s their excuse? Snow Patrol’s almost ready for a “Where Are They Now?” special, so a cover of “Chasing Cars” four years after the original holds limited appeal.

The Baseballs do one thing and they do it well. For this to really work though, the turnaround has to pick up. I’m sure they’d do a great version of “Fuck You.” It’s a shame we’ll have to wait ‘til 2014 to hear it.

The Baseballs Strike! Back Tracklist: