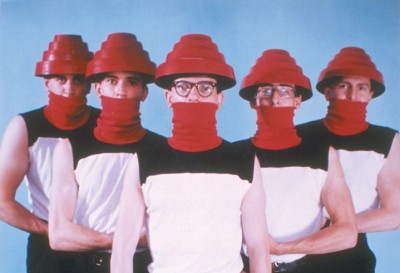 Devo did some bizarre covers back in the day. The most famous is their schizoid take on the Rolling Stones‘ “Satisfaction,” but they’ve warped everyone from Allen Toussaint (“Working in the Coalmine”) to Nine Inch Nails (“Head Like a Hole”) to fit their strange vision.

Vying for the weirdest has to be this cover of the traditional folk song “Worried Man,” or “Worried Man Blues.” Tying into their de-evolution metanarrative, the video features the band as glowing nuclear plant workers transporting poorly-sealed radioactive barrels. A creepy giant baby (“Booji Boy”) pops up with a sermon about the perils of modernization. A sleazy record producer fights over tampons with his new-wave daughter. All to a bizarre soundtrack that only Mark Mothersbaugh and co. could create.