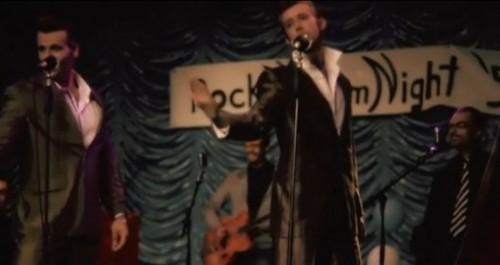 The Baseballs should stink. The conception of turning modern pop hits into rockabilly raves, greasy pompadours and all, sounds godawful. Somehow they make it work though. Their cheeky cover of Rihanna’s megahit “Umbrella” has been viewed over ten million times on YouTube and their 2009 debut Strike! is set for a grand re-release this fall.

Their new video features a big-bopping take on Snow Patrol’s “Chasing Cars.” The boys hit the prom stage, performing on an Ed Sullivan-esq variety show for a crowd of screaming teens. The tune goes from Drifters harmonies to Jerry Lee Lewis piano in seconds, leaving the original emo ballad in the dust (or, more accurately in this case, on fire).

Check out more Baseballs at their website or MySpace.