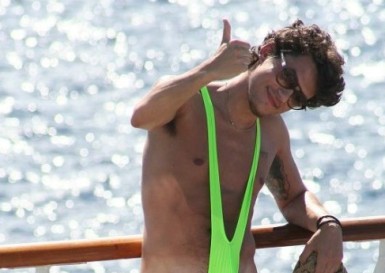 Katy Perry is selfish. It’s the only explanation for why she keeps stealing summer from everyone else. She hijacked the season in 2008 with “I Kissed a Girl” and now she’s repeated the trick for 2010 with “California Gurls,” a song even she admits is pretty stupid. Hey Katy, let someone else get a shot!

The stupid comes full circle when John Mayer covers the song. He first did so for the Q102 radio station in an acoustic jam a few weeks back. He readily admits to being vague on the words, but gamely plays along. Then last night in California, he brought his full band to the table for a jazzy instrumental version, complete with sax solo. “I’m sorry I had to sell out like that,” he said after the latter performance. “It’s what it takes to keep up with the Joneses.

Watch both performances below. Neither one’s gonna win any awards for recording quality, but they’re both funny in that sketchy John Mayer way.

Check out more John Mayer at his website or MySpace.