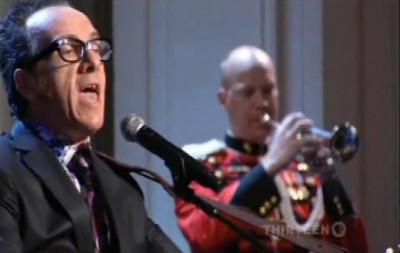 A few weeks ago we saw Jack White and Dave Grohl cover Paul McCartney at the White House as a preview of the PBS special: Paul McCartney: The Library of Congress Gershwin Prize for Popular Song. The full special aired Wednesday night, but so far only two videos have hit the interweb. The first is Elvis Costello, who brings his froggy drawl to “Penny Lane” alongside a piccolo trumpet. A cute story about first hearing the song on the radio precedes the cover.

But Elvis Costello’s impressive-as-always performance isn’t the real story here. The Jonas Brothers take on “Drive My Car,” which will likely provoke outrage from anyone reading this. Prepare to be pleasantly surprised. Presumably invited to appease the Obama girls, they turn in a shockingly decent performance! Being accompanied by McCartney’s band surely helps, but their singing and playing doesn’t sound that far off the original. While ordinarily a carbon-copy cover would be a bad thing, I give the JoBros credit for even managing.

Keep an eye on this page. More videos will be added as they surface.

One Response to “Elvis Costello, the Jonas Brothers Honor McCartney at the White House”