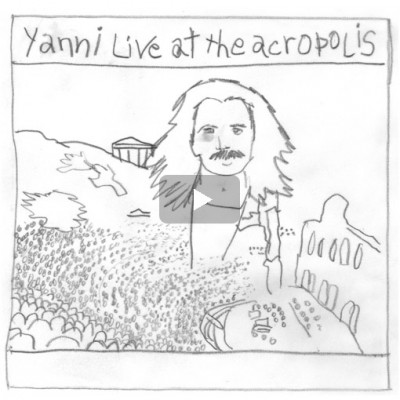 The impossible has happened: Beck is getting weirder. Yes, it seemed impossible after he buddied up with Danger Mouse or performed marionette dinner-percussion concerts, but the trend is clear. Exhibit A: his Record Club.

For those unfamiliar, Beck began a Record Club in 2009 where he and a bunch of friends got together and covered a classic album beginning to end. The first choice was obvious: the Velvet Underground & Nico. The next album branched a little farther out: Songs of Leonard Cohen. Then came INXS’s Kick, which seemed significantly more left-field than the classic songwriter groove. But the new choice takes the cake. It’s Yanni. Yes, that Yanni.

The album is Yanni’s 1994 breakthrough Live at the Acropolis and it is without doubt the most WTF moment yet. Even stranger: Beck managed to convince Sonic Youth’s Thurston Moore to join him on this, along with members of Chicago indie band Tortoise. They will release a track a week until all eleven terrible, terrible songs have been completed. First up is “Santorini.” Watch it below and check Beck.com every week for the next tune.

The next album chosen will be either Barney & Friends or Tuvan throatsinging. You heard it here first.

Stay up to date at Beck.com.

One Response to “Beck and Thurston Moore Cover…Yanni??”