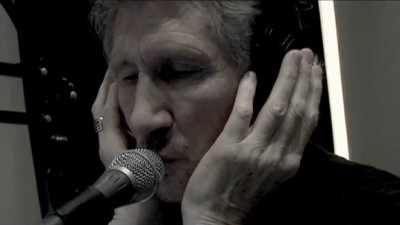 Musicians are none too pleased with Israel these days. Everyone from Elvis Costello to Pixies has canceled concerts and now Pink Floyd’s Roger Waters throws his support behind the Palestinian cause as well with a moving cover of “We Shall Overcome.” Stripped of its ties to the Civil Rights movement, the song sounds a universal cry on behalf of oppressed peoples everywhere.

When you listen, you know this wasn’t thrown together yesterday. In fact, the song debuted in January to support the Gaza Freedom March. Only this new video ties it to the current events. Building drums and a guitar solo from legendary axeman G.E. Smith support some of the best singing Waters has done in years.

In a note accompanying the video, Waters wrote about his original decision to record the song, months before the flotilla incident.

Over the new year 2009-2010, an international group of 1500 men and women from 42 nations went to Egypt to join a Freedom March to Gaza. They did this to protest the current blockade of Gaza. To protest the fact that the people of Gaza live in a virtual prison. To protest the fact that a year after the terror attack by Israeli armed forces destroyed most of their homes, hospitals, schools, and other public buildings, they have no possibility to rebuild because their borders are closed. The would be Freedom Marchers wanted to peacefully draw attention to the predicament of the Palestinian population of Gaza. The Egyptian government, (funded to the tune of $2.1 billion a year, by us, the US tax payers), would not allow the marchers to approach Gaza. How lame is that? And how predictable! I live in the USA and during this time Dec 25th 2009-Jan3rd 2010 I saw no reference to Gaza or the Freedom March or the multi national protesters gathered there. Anyway I was moved, in the circumstances, to record a new version of ” We shall overcome”. It seems appropriate.

Whatever your stance on the conflict, hopefully we can all agree that this is a damn fine recording. He repeats the “break down prison walls” line, inviting the question of if he will incorporate this cover into his upcoming tour of The Wall. Probably not, but it would make a moving encore.