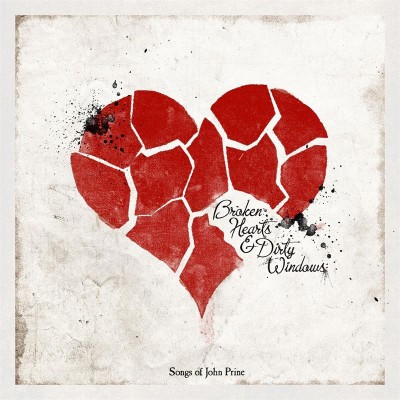 The artists who appear on Broken Hearts and Dirty Windows: Songs of John Prine comprise a who’s-who of young folk/Americana bands, but these obvious admirers choose some very non-obvious tracks. The usual-suspect songs are largely missing in action. No “Paradise,” no “Sam Stone,” no “Illegal Smile.” The only no-duh selection is “Angel from Montgomery,” one of four songs from Prine’s self-titled debut. The rest span the gamut, dusting off tunes from the ‘80s and ‘90s alongside the canonical ‘70s material.

The songs’ relative obscurity may be this tribute’s saving grace. All the artists turn in respectable performances, but none venture far afield (Drive-By Truckers’ rocking “Daddy’s Little Pumpkin” being the possible exception). Sure, Jim James sprinkles a little Omnichord into My Morning Jacket’s falsetto wash and Conor Oberst unleashes more energy than anyone familiar with his work as Bright Eyes would have thought possible, but neither performance would surprise anyone familiar with the originals. The set peaks five songs in, when the lazy drawl Lambchop’s Kurt Wagner brings to “Six O’Clock News” uncovers the absurdly morbid song as a dark comic gem.

Unearthing lesser-known songs like “Let’s Talk Dirty in Hawaiian” and “Bruised Orange (Chain of Sorrow)” is an accomplishment in and of itself, so the artists involved (Those Darlins and Justin Vernon of Bon Iver, respectively) can be forgiven for not reinventing the wheel. If this compilation exposes a few younger fans to an underappreciated songwriter, that’s more than enough.