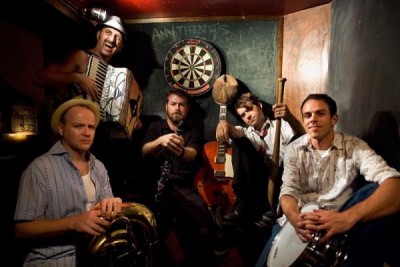 The news last year that dapper Mario-lookalike keyboardist Franz Nicolay was leaving the Hold Steady hit fans hard. How would music survive without the ever-chipper gent with the best mustache in rock?

Good news: It doesn’t have to. Franz is back with gypsy-punk band Guignol, a New York quartet that also features Peter Hess of Eastern Bloc rockers Balkan Beat Box. For their latest album they team up with Mischief Brew (Erik Peterson to his mom) for 13 originals, a Django Reinhardt song, and a shit-kicking Iron Maiden cover that we’re pleased to premiere here. Listen and download below.

One of the metal band’s classic tracks, “Hallowed Be Thy Name” has closed many a Maiden show since its 1982 premiere on The Number of the Beast. Instead of a dual-guitar assault though, Guignol & Mischief Brew go for a riotous instrumental that proves the accordion can rock.

Fight Dirty is out via Fistolo Records.  Check out more at the Guignol or Mischief Brew website.