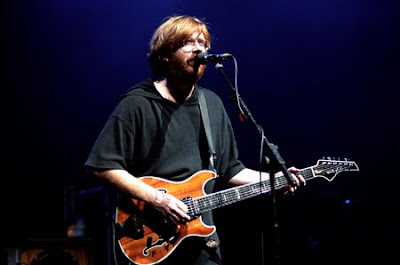 This past week Late Night with Jimmy Fallon celebrated the thirtieth anniversary of Exile on Main St. with a week of covers.  The festivities included Green Day, Sheryl Crow and Taj Mahal (who schooled the young’uns).  The week wrapped up with Phish, the obvious choice since just last Halloween they performed all of Exile live.  They kept it at five minutes for late night though, rambling through “Loving Cup.”

The Exile set continued the Halloween tradition where the quartet covers full albums; in the past they’ve done the Who’s Quadrophenia, Talking Heads’ Remain in Light and the Velvet Underground’s Loaded.  The first they ever did though was the Beatles’ White Album in 1994.  Over ninety minutes they rolled through “Back in the U.S.S.R.,” “While My Guitar Gently Weeps,” and yes, even “Revolution 9.”

Near the end comes “Savoy Truffle,” a loping George Harrison tune about Eric Clapton’s sweet tooth.  This is a cautionary tale though.  Enjoy your ginger slings and cherry creams while you still have teeth, since “you’ll have to have them all pulled out after the savoy truffle.”

Phish: Promoting a healthy lifestyle since 1994.

One Response to “Shuffle Sundays: Savoy Truffle (The Beatles)”