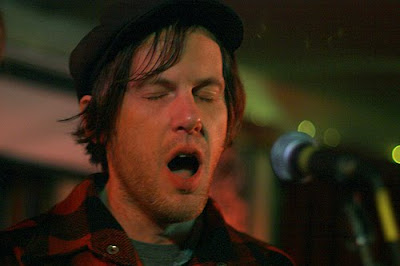 Neutral Milk Hotel’s Jeff Mangum is indie rock’s J.D. Salinger.  His album In the Aeroplane Over the Sea resonated with young people on a deeply personal level, leading to the high school “It changed my life” claims usually reserved for Catcher in the Rye.

Then he disappeared.  He didn’t retreat to New Hampshire like Salinger, but with rare exceptions he stopped recording or performing.

Needless to say, his performance two weeks ago at New York’s Le Poisson Rouge came as a bit of a shock.  He strummed his way through five songs to benefit ailing musician Chris Knox.  The venue strictly prohibited even camera phones, an announcer made clear this did not signal a comeback, then Mangum vanished again, leaving the world to wonder when next he will surface.

Until that, fans can spin Live at Jittery Joe’s, a scattershot live album chronicling a 1997 coffeehouse concert.  In addition to fan favs like “Two Headed Boy,” the disc boasts a few unexpected surprises, like this cover of the Paris Sisters’ 1961 hit “I Love How You Love Me.”  Phil Spector produced this hit when his Wall of Sound was still in its infancy.  Mangum’s pulls it back for a subdued approach.

3 Responses to “Shuffle Sundays: I Love How You Love Me”