Each week Shuffle Sundays features a cover chosen at random. The songs will usually be good, occasionally be bad, always be interesting. Downloads are only available for one week, so get them while you can. 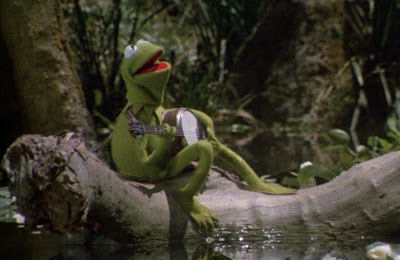 “Why are there so many songs about rainbows?”

It’s a valid question, but in the opening sequence of 1979’s Muppet Movie, you get the sense Kermit’s only really referring to one song: Over the Rainbow. Like that rainbow tune did for Dorothy, “The Rainbow Connection” establishes up front the main character’s restlessness, his/her desire to see what lies beyond the swamp/Kansas. For Kermit that’s Hollywood, for Dorothy that’s Oz. Same difference.


“The Rainbow Connection” has taken on a life far beyond the movie that spawned it. Written by noted songwriters Paul Williams (“We’ve Only Just Begun”) and Kenneth Ascher, it went to the top 40 for seven weeks and was named the 74th best movie song of all time by the American Film Institute (number one: that other rainbow song). Williams and Ascher themselves performed it on the TV special The Muppets Go Hollywood, comparing it to “When You Wish Upon a Star.” Watch it here (skip to 6:30).

The song has been covered by, well, just about everyone. Willie Nelson did it. Jason Mraz did it. The Carpenters, Dixie Chicks, and Dresden Dolls did it. It’s safe to say none of those sound quite like the tongue-in-cheek beat jazz of Puttin’ on the Ritz. Picture Kermit singing in a smokey lounge, beret pulled low, cigarette dangling from his lower lip. If that sounds ridiculous, that’s kind of the point.