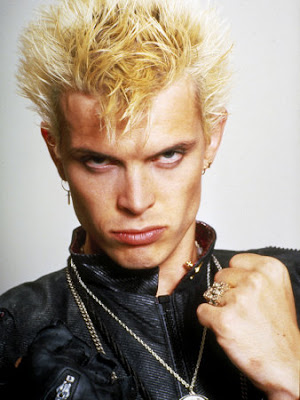 As a kid I remember watching VH1’s Top 80 of the 80s music video countdown and being enthralled by the clip for Billy Idol’s “White Wedding.” The candelabra, the leather glove and, of course, the sneer — it was all so wonderfully trashy. No one unwraps a head scarf quite like Billy.


Billy’s milked the wedding thing ever since, most notably in his star Wedding Singer cameo alongside Adam Sandler. Who would expect ol’ Billy I. to wax poetic on respecting women?
Still with us? Good. Named after a group of 19th-century waitress serving travelers headed West, the Harvey Girls are a Kansas duo who put out a fantastic covers album called Our History Is Your Kitsch a few years ago. It features covers of Blue Öyster Cult, Alan Parsons Project and, of course, Billy Idol. You can download it for free on their website.