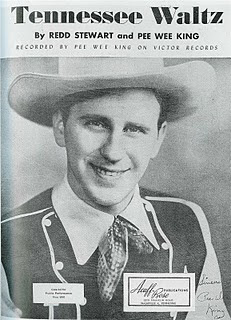 “The Tennessee Waltz” has always frustrated me. The singer lost his woman, but all he can think about is how beautiful the song playing at the time was. Which makes you want to hear this majestic “Tennessee Waltz.” But he’s singing this song now…about how his girl left him…when they were playing this song…about how his girl left him….when they — DEATH SPIRAL!

Many good songs have been nonsensically self-referentially — “Crocodile Rock,” “Roll Over Beethoven,” “You’re So Vain” — but few have inspired so many classic recordings, ranging from Sam Cooke’s upbeat swing to Senator Lamar Alexander’s mournful piano. It’s one of six official state songs of Tennessee and it all started in 1947 with Pee Wee King, performing it here with the Golden West Cowboys.

One of the more unlikely renditions comes from Leonard Cohen, a man who is covered every time you turn around but almost never covers anything himself. Still, he broke tradition in Poland in 1985, cleaning up the concert recording a couple decades later for inclusion on his most recent album, 2004’s Dear Heather. A video of the original performance (and endearingly awkward dedication) still circulates.


I shuddered a little when I heard that Hem covered this country classic, dreading the imminent Finnish metal onslaught. My fears were assuaged when I heard the opening harmonies and realized I was confusing them with Helsinki goths HIM (who, to be fair, do a unique “Solitary Man”). Whew.

One Response to “Shuffle Sundays: The Tennessee Waltz”