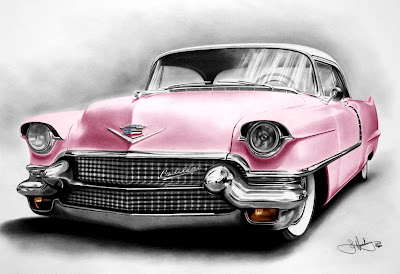 Elvis Presley’s pink 1955 Cadillac Fleetwood may be the most famous car in rock and roll. Originally purchased as a gift for his mother (who didn’t even have a driver’s license), Elvis reclaimed it after a previous vehicle went up in flames. Though the King had many cars come and go in his life, he always held onto that Caddy, which since his death has enjoyed a quiet retirement at Graceland.

The celebrated sedan has made many pop culture cameos, most notably in Bruce Springsteen’s “Pink Cadillac.” The rockabilly feel of the original coupled with the innuendo-laden lyrics drew straight from the Presley tradition, but at the last minute Bruce dropped it from Born in the U.S.A. in favor of “I’m Going Down.” Live performances from the era helped introduce the tune to his audience, including this ten-minute version from a Philadelphia show where he introduces it with his version of the Garden of Eden story.


Sadly, the song didn’t achieve wider fame until from a cheesy R&B cover by Natalie Cole three years later. It sounds like Donna Summer attempting “That’s All Right Mama,” belting this overproduced schlockfest oblivious to any hint of sexual suggestion.

Graham Parker manages better. Best known for his late ‘70s work with the Rumour, Parker’s relationship with Springsteen goes back to the latter’s guest vocals on 1980 song “Endless Night,” which Rolling Stone characterized as “just-singing-along irrelevance.”

For 2003 tribute album Light of Day Parker delivered this acoustic “Pink Cadillac,” returning the song to its original incarnation as a solo performance recorded for Springsteen’s stark 1982 Nebraska. The driving strumming sounds sincere, but the wink in Parker’s voice shows he knows exactly what the Boss is talking about. And it’s not a car.