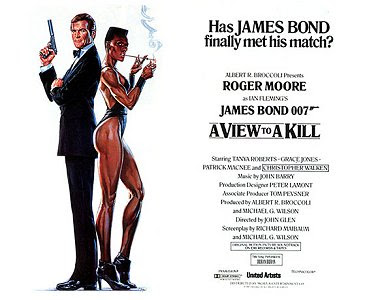 Well, it was bound to happen eventually. Ladies and gentlemen, Cover Me is ashamed to present: A truly awful Shuffle Sundays cover.

Due to a desire to keep tribute albums complete, not every cover song in the old iTunes library is a gem. To its credit, the blandly-titled The Duran Duran Tribute Album has some good tunes. Eve’s Plum does a seductive “Save a Prayer” while Home Grown puts a smooth ska swing to “Planet Earth.” Unfortunately, it also contains Gob’s merciless assault on “A View to a Kill.”

The original “View to a Kill” holds several historical distinctions. It is the only James Bond theme to hit number one on the charts. It was the final song Duran Duran recorded with their original lineup before their 2001 reunion. Plus, the video features one of the cheesiest closing lines ever committed to tape.


If Gob’s cover never quite lifts off, it’s not for lack of trying. The British Columbia quartet put their three-chord punk spin on the ’80s anthem, changing what was a mediocre movie theme to something far more aggressive…and unpleasant.

The quickest way a cover song can fail is by imitating the original, so give Gob credit for avoiding that on this 87-second blast. In fact, they bastardize the song so thoroughly it’s unclear if they’ve even heard the original. M would not approve.

What do you think? Am I being too harsh? Discuss this song in the comments section below.