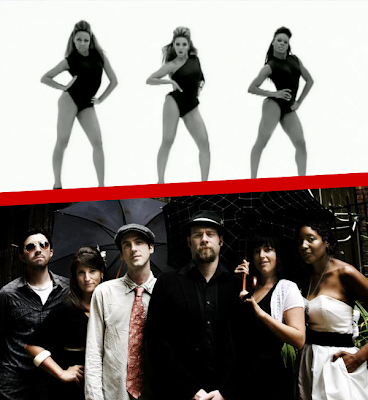 Last night Beyoncé’s “Single Ladies (Put a Ring On It)” was nominated for Song of the Year at the 2010 Grammys. And we all know it’s going to win. After all, let’s not forget that Kanye West is a fan.

Back in September though, long before “Imma let you finish” became an obnoxious internet meme, Brooklyn cabaret-rock sextet Peculiar Gentlemen entered the Cover Me world as September’s Cover Commissions artist. The potential cover songs ranged from Ray Charles to Phoenix, but the leotard-clad I Am…Sasha Fierce singer took the top prize. [Missed the vote? November’s Commissions with Brady Harris is still going on, so vote on the right! Plus, December’s Commissions coming next week.]

The guys and gals of Peculiar Gentlemen promptly crammed into their three-wheeled jalopy and lurched on down to the tacky tourist saloon where they make their magic. At least, that’s the scene I picture listening to this. Gentlemen singer Sara Auster can tell us what really went down.

Beyonce loves Peculiar Gentlemen! We used to cover Crazy in Love many years ago at our live shows, much to her delight. When Single Ladies came out, we thought it was a great party song, and would be another good track to interpret. When we cover songs we usually approach them one of two ways. Staying as true to the original as possible, or completely re-contextualizing it. Our original intention was to keep it true to form. We wanted to keep the dance floor vibe, but still sound like a live band, and not a processed piece of music. However, as the recording process progressed, our musical ideas started to move in new directions. After working this song out in the studio, we’re really looking forward to playing it on stage and seeing how the crowd reacts (and we’ll be able to spot the all the hot single ladies)!

But who needs hot single ladies when you’ve got organ swirls, poppy Motown backing vocals and a singer who goes by “Sweet” Willy Jive? Enjoy.

Peculiar Gentlemen – Single Ladies (Put a Ring On It) (Beyoncé)

This mp3 may be freely shared with the artist’s blessing. Post it on your blog, send it to your friends, tweet it to the world. When you share this however, please include a link to this site. Cover Commissions is a monthly occurrence, and the more attention this project draws the more exciting we can make future installments.