Cover Commissions is a monthly series in which a featured artist produces a special cover for this blog. The song to be covered is usually chosen by blog readers via a poll or suggestions form. Any artists interested in participating in a future installment, please email me at the address on the right. We’re still looking for an August artist! 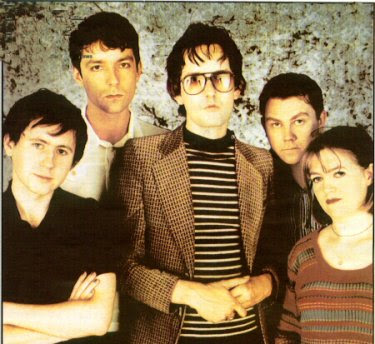 Jordan Galland’s Cover Commissions poll a few weeks ago got a record number of votes. The Pulp fans fought the Duran Duran crew to the bitter end, but Jarvis Cocker finally got the edge over Simon Le Bon. “Bad Cover Version” it is (but “Hungry Like the Wolf” fans, don’t despair — scroll down for a surprise.)

All jokes aside, Jordan did a phenomenal job with this We Love Life nugget. I’ll let him introduce it.

First off, the title just calls out for someone to cover this song. Even at the risk of someone saying “it’s a bad cover version of Bad Cover Version.”

The other day I “stumbled” upon a couple kids rapping over an Eminem song, their own lyrics in his style, about the trashy remakes and sequels Hollywood is spitting out. “Would the real Transformers please stand up?”

It had occurred to me before, but now it was obvious – a lot of people feel this way, and I thought back to Jarvis singing “A bad cover version of love is not the real thing” and realized what he was singing about is only getting worse.

It was far from my favorite Pulp song, but the chorus melody is classic, and the sentiment of the song is at the heart of what the band has always been trying to communicate. Yes, our lives are like movies, sometimes depressing movies, sometimes sexy movies, whatever – but let’s not make them bad remakes of movies.

The recording they did is epic and ballady, so I felt like tightening it, and speeding it up. I also instantly knew I wanted to try and get those Little Shop of Horrors ‘50s style backing vocals on the chorus.

When I cover a song, I like to do a version that occupies a completely different space than the original. For that reason, I usually try to cover songs from female artists, because a guy’s voice instantly makes it different.

It was a challenge figuring out how the main riff, played on a twangy vibrato guitar in the original, could be played on piano without it just seeming like single notes.

But wait, there’s more! Jordan’s a warm-hearted guy and he felt bad for you ‘80s fans. So once again, heeeeeeeere’s Jordan!

I felt like “Hungry Like the Wolf” was a decade too late. While the original recording is clearly from the ’80s, the chords and the sentiment seem to sit better on a couch next to Jim Morrison. The trumpets, played by Sam Oatts, hopefully give it that feel.

On both songs, I was working completely alone, so another challenge was trying to make it feel like a band.