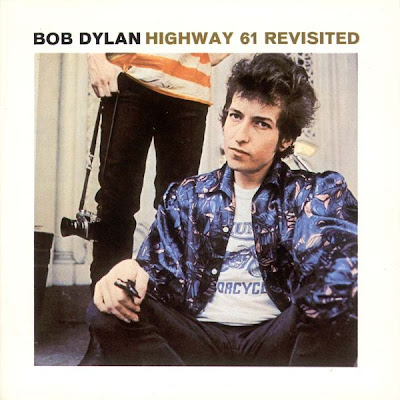 Plenty has already been said about Highway 61 Revisited. Rolling Stone named the album the fourth best of all time, while Mojo was a little more stingy, giving it fifth. The leadoff track is frequently given the purely objective label the “Best Song Ever,” though some would argue for the closer. It’s an album whose songs cannot be bettered, so I went looking for versions that didn’t try, artists not trying to improve the songs but letting the songs improve them. And where better to witness acts playing around with these classic tracks than straight from the stage. So this set of covers has a special hitch: they’re all live, many unreleased.

Jimi Hendrix – Like a Rolling Stone
Bruce Springsteen has described the opening to this tune as the “snare shot that sounded like somebody had kicked open the door to your mind.” Hendrix continues, explaining “It made me feel that I wasn’t the only one who’d ever felt so low.” It’s a song that resonates with many, so perfect in the original in lends itself to lame copycat cover versions. Hendrix hinted at the glory that would be his “All Along the Watchtower” in this live take from the legendary Monterey Festival (this performance presumably coming before he lit his guitar on fire). In Jimi’s voice it sounds like both diss and come-on, seductive in a way that belies that snarl. [Buy]

The Walkabouts – Tombstone Blues
Richie Havens country soul version was a highlight of I’m Not There (watch it here), but the Walkabouts go all cowboy country on this take, sneering and sashaying and the drums trample along. Then guitar solo’s a little low in the mix, but the outlaw rhythm is enjoyable enough you’ll forgive the sound guy. [Buy]

Levon Helm Band – It Takes a Lot to Laugh, It Takes a Train to Cry
I’ve never heard a compelling explanation for what the hell this title means, but Levon rocks so hard it doesn’t matter. Figures that one of Bob’s first drummer from The Hawks (later The Band) should take on this one last year, with full horn section and New Orleans boppin’ piano. [Buy]

Chuck Prophet – From a Buick 6
“All right Mr. Soundman, faders up.” A drum machine is all the background Prophet needs for his drawled baritone and funky blues guitar. He sings that his woman walks like Bo Diddley, but it sounds like Chuck’s mastered that strut himself. [Buy]

Elliott Smith – Ballad of a Thin Man
The original’s got one of the best organ parts of all time, so what does Smith do? Gets rid of it completely. It’s more of a slow-grunge sound, Smith smoothly running through the lyrics like they’re second-nature. His understated delivery emphasizes the tumbling cascade of images, perhaps lost on the perpetually screaming crowd. [Buy]

Mojave 3 – Queen Jane Approximately
The addition of a female voice adds a sensitivity to the pleading-boy aesthetic. Accompanied by softly tinkling piano, it evokes a pastoral feel for an actual queen. [Buy]

Johnny Winter – Highway 61 Revisited
Take your favorite guitar performance of all time. Now imagine how you would feel if it was bumped down to number two. Once you’ve mentally prepared yourself for that possibility, come back and listen to this. [Buy]

Neil Young – Just Like Tom Thumb’s Blues
Bob described his experience at his high-profile 30th Anniversary Concert Celebration as like attending your own funeral. Hell of a funeral if Uncle Neil makes the scene though, stomping his way through a characteristically ragged performance backed by Booker T. and the MG’s. Neil just soloed all over Booker’s recent Potato Hole incidentally, so you should check that cover-fest out too. [Buy]

The Grateful Dead – Desolation Row
Though “Desolation Row” is one of Bob’s most well-known songs, artists seem to think it too sacred to even try (or maybe they can’t learn all the words). Ignoring of My Chemical Romance’s embarrassing take from a few months back (youtube if you dare), the Dead’s version is the one to keep, bumping along pleasantly in this take from 1990 released on their Dylan covers comp Postcards of the Hanging. [Buy]